2 Now these are the people of the province who came up from the captivity of the exiles, whom Nebuchadnezzar king of Babylon had taken captive to Babylon (they returned to Jerusalem and Judah, each to their own town, 2 in company with Zerubbabel, Joshua, Nehemiah, Seraiah,Reelaiah, Mordecai, Bilshan, Mispar, Bigvai, Rehum and Baanah):

The list of the men of the people of Israel:

42 The gatekeepers of the temple:

55 The descendants of the servants of Solomon:

59 The following came up from the towns of Tel Melah, Tel Harsha, Kerub, Addon and Immer, but they could not show that their families were descended from Israel:

61 And from among the priests:

62 These searched for their family records, but they could not find them and so were excluded from the priesthood as unclean. 63 The governor ordered them not to eat any of the most sacred food until there was a priest ministering with the Urim and Thummim.

68 When they arrived at the house of the Lord in Jerusalem, some of the heads of the families gave freewill offerings toward the rebuilding of the house of God on its site. 69 According to their ability they gave to the treasury for this work 61,000 darics of gold, 5,000 minas of silver and 100 priestly garments.

This chapter of Ezra is a historical narrative listing the names and numbers of the families that returned to Israel after 70 years of exile in Babylon. Passages of Scripture like this typically elicit one sort of reaction to readers: boring. But before we skim past these 70 verses of Scripture and allow our eyes to cross from the long names and longer numbers, let’s remember who these people were and where they were coming from.

Ezra 2:1 tells us “Now these were the people of the province who came up out of the captivity…”. Seventy years earlier, God had punished the Israelites for their unfaithfulness and sent them into exile. These people returning included those who had experienced the exile firsthand as well as their offspring who had been told by their fathers and grandfathers where to return after their captivity.

Verse 64 states that “The whole assembly together was 42,360…” so around 50,000 people are returning to Jerusalem and Judah. It’s important to note that this is a small number compared to the half a million people who once lived in Jerusalem. We will learn in later passages of Scripture that this was the first of 3 waves of people returning from captivity, but even so, there were tens of thousands of Israelites who never returned to the Promised Land. We can make assumptions about those who didn’t return: that they were too comfortable in their new surroundings or possibly too afraid of what might await them in their old surroundings. The names listed in this passage of Scripture, though, represent family after family who obediently returned to help rebuild the temple and properly restore worship in Israel and their names are eternally recorded as a result of their obedience.

This group of people is not only remembered for obedience in returning to the Promised Land, but they are also remembered for their contributions to the rebuilding of the temple. Ezra 2:68 says “… when they came to the house of the Lord that is in Jerusalem, (they) made freewill offerings for the house of God, to erect it on its site.” A freewill offering was given voluntarily and was given as the Lord moved the hearts of the Israelites. So these Israelites took a faithful first step of obedience by traveling hundreds of miles back to their homeland, and once they got there, they continued to be obedient in giving to the Lord of their resources for His glory.

So instead of labeling Ezra 2 as an irrelevant and boring genealogy, we can thank God for each of the names listed in this chapter because they are examples to us of obedience and sacrificial giving. They are heroes of our own faith. Glance back at one of the verses, pick a name, and praise God for their faithfulness. What a gracious God we serve that He has provided us with such precision and details!

The journey of the Israelites is quickly summed up in Ezra 2:1 by saying “They returned to Jerusalem…” but that was not as simple a journey as it sounds. That journey would have been close to 1,000 miles and would have taken several months. Here is a visual of the possible routes they may have taken to return to the Promised Land: 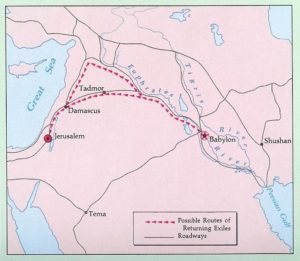 Did you learn something today? Share it with our Bible Reading Plan community by commenting below.

Interested in writing for the Bible Reading Plan? Email hello@biblereadingplan.org.

Sign up to get The Bible Reading Plan delivered straight to your inbox daily! Never miss a day in The Bible again!